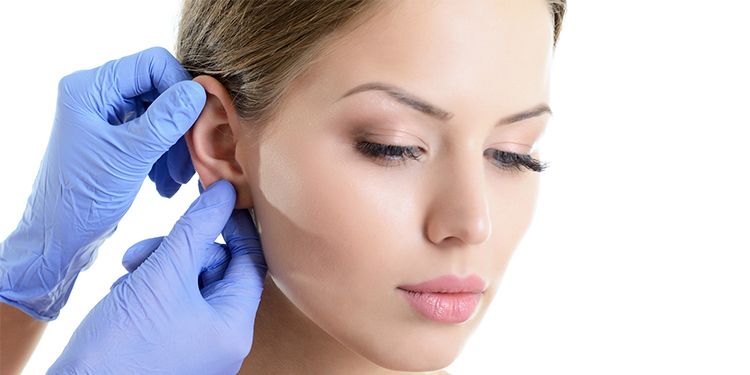 The fact that the ears are not in the correct position in proportion to the head and face may result in an aesthetically unpleasant appearance. Prominent ear condition can be easily resolved in today's medicine with Otoplasty, which is a very easy aesthetic operation that leaves no scars.

Otoplasty is a method of eliminating the defects in the external ear structure seen in children and adults by aesthetic surgery.

What is prominent ear and what kind of problems does it cause?

Prominent ear is the most common ear deformity. It is mostly caused by the laxity of the cartilages in the ear region or insufficient ear folds. The ear which has a loose structure for these reasons bends forward or sideways, causing an unpleasant image. It is usually seen in both ears, but in rare cases only one ear may look like prominent ear. Prominent ear definitely requires intervention for any psychological problems it may cause and can be easily corrected with a simple operation by the courtesy of modern medicine’s facilities.

Shaping of the auricle occurs while the infant is still in the womb; the auricle continues to develop until the age of 5-6 years and takes its final shape at this age.

The group that has suffers the most from ear deformities is the children. Nicknames such as “scoops" given to school-age children by their peers cause problems such as psychological problems, indifference to lessons, and being alienated from school. Therefore, the problem is solved by otoplasty in children with complete ear development.

Children from which age group can have surgery?

Preschool children should have prominent ear surgery before they have psychological problems, develop indifference to lessons and are alienated from school. Psychological adaptation is much easier in these operations performed at an early age.

What is the anatomical problem in prominent ear?

How is prominent ear surgery performed?

During the operation, an incision is made on the back of the ear, cartilage is thinned with a file and the incision is then sutured.

Since the sutures in the ear will remain in the back, they are unnoticeable when looked at from the front.

As in all operations, you're advised to stop smoking and alcohol consumption at least one week before otoplasty. This is very important for a rapid healing process. In addition, avoid taking aspirin-like blood thinners before the operation. Apart from these, inform your doctor who will perform the surgery about any medications you take regularly.

After cosmetic ear surgery, you'll wear a not-too-tight hair band that entirely covers the ear and continuously wear it for about 3 weeks. This reduces the load on the stitches holding the cartilage, which wants to return to its original state. Cartilage hardens and heals in its new position. Another function of the hair band is to reduce edema in the first few days after prominent ear surgery and ensure that the swelling subsides quicker.

Loss of sensation in the ear may last for a few weeks, which is normal. In that period, avoid hair drying and blow drying.

Will there be any scar left after prominent ear surgery?

The incision of prominent ear surgery is concealed behind the auricle. Therefore, it's unnoticeable even when head is looked at from the back.

The risk of developing an infection in cartilage tissue is very low, and the surgeon will take measures to further decrease that risk but in rare cases, this might happen.

Patients with prominent ears are satisfied with the result if the ear is close to the head as much as possible. But this gives the ears an unnatural appearance. For this reason, the ears should be approached to the head as much as is required. In the initial postoperative period, the ears may look a bit like that but as edema subsides, they acquire a more natural look.

Surgery price varies depending on whether prominent ear problem is unilateral or bilateral, whether there are any additional problems, the presence of earlobe problem, and the type of anesthesia. Contact us for further information and price details.

Prominent ear surgery usually does not cause any pain. Any pain you might have will be mild pains that can be resolved with painkillers.

There might be some opening in the ears after surgery. This risk is lower in children. Patients who are operated on by appropriate methods and wear the hair band for adequate amount of time afterwards have minimum risk on this matter.

When can I resume normal activities after surgery?

Does otoplasty cause hearing problems?

This operation, which is performed for aesthetic purposes, has nothing to do with hearing functions so it is unlikely to cause any hearing problems.

Tip plasty is performed to deliver the desired look to the cartilage section in the front part of the nose without intervening in the nasal bone in patients with no deviation[...]

With stem cell technology, stem cells obtained from one's own fat are combined with their own fat and permanent filling is obtained. Stem cell-enriched fat filler clings to[...]

Nano Fat Grafting is a very successful method in order to eliminate the volume losses on our face with aging. It can be applied to under eye, cheek, forehead, chin and other[...]